6th-grade science teacher Brian Smith holds a box of Wegmans Peanut Butter Corn Crunch cereal in front of his class and asks them how they can figure out what’s inside.

The answers come quickly: weigh it, shake it, open it. As Smith does these it quickly becomes apparent that there is no cereal in the box. He tips over the open box and pours out its contents – uninflated balloons. The lesson? Looks can be deceiving and you have to do the research.

So, he asks his students, how as scientists could they find what is below the earth’s surface? The answers come just as quickly: dig, view from above, see how natural disasters such as earthquakes, volcanoes and tsunamis change the surface.

“They need to know this, they need to have a broader understanding as opposed to just stating the layers of the earth,” said Smith.

Using these series of questions to illicit responses is part of Smith’s transition to using inquiry-based learning along with new New York State Science Standards. These include the science and engineering practices of asking questions and defining problems, planning and carrying out investigations and analyzing and interpreting data.

“A team of us looked at the old standards and compared it to the shift to the NGSS (Next Gen Science Standards),” said Smith. “We developed an overarching question to tie the Unit together.  Each section of the Unit poses a question that ties to the information we are discovering through the section.  The goal is to develop a deeper understanding instead of merely knowing facts.

Smith said he focused more on student discovery than simply giving information. Questions such as what did you see, what is going on, why is it important are part of each lesson.

“Students are willing to participate, looking to actively get engaged.  They get to become active learners, making connections with experiences they have had and drawing conclusions through deeper thinking,” said Smith.

“This is a very exciting time for science. The District is allowing time and resources so we can change the way we teach science in our classrooms. The new standards require much deeper thinking in regards to science concepts and a lot less memorization of facts and vocabulary, said teacher Daina Kocak. “This is the way science should have always been, questioning the world around us and then coming up with solutions and explanations on their own.”

“This work is amazing and absolutely is preparing students for the future. It ignites curiosity and allows students to think creatively and critically,” said teacher Stef Olbrys.

New York is phasing in these new standards with a new assessment to launch in three years. Windsor is focusing professional development and implementation on grades three and six this year and will moved on to grades four and seven next year.

Using her dad’s geology kit from college Kirsten used mineral oil and rocks to determine which type of rock – igneous, metamorphic, or sedimentary – had the best chance of holding oil or natural gas. Using three samples of each rock type, Kirsten placed three drops of mineral oil on each rock sample and used a timer to see how long it took for each sample to soak up the oil, if at all.

Students from ten counties from the Canadian border to the Pennsylvania border competed in the event at Onondaga Community College. Benedict took home a Junior Division Honors Medallion- 7th Grade from the event.

A group of Windsor Middle School students spent the past few months giving new life to an old table.

During the fall term Avery Robinson, Jeremiah Baxter, Noa Lawrence and Lukas Kappler, working under the direction of Mr. Jason Dewey repaired and refinished the large conference room table in the Middle School main office. The high-quality table had become scared and worn over many years of use.

The students evaluated the extend of repairs the table needed and began a design process. The team met with Middle School Principal Mr. Kevin Strahley to determine the final design. There were a number of creative proposed designs.

On Wednesday Merwin and her classmates learned the slime they made was the result of an exothermic chemical reaction. It’s a high concept made fun to the students thanks to an international STEM (Science, Technology, Engineering, and Math) collaboration that’s bringing common understanding to complex ideas.

“A lot of the stuff is big words that maybe one or two students pick up,” said 4th-year Binghamton University student Kevin Kong who presented to the Kindergarten class. “But you talk about chemical reactions and ask them about it 45 minutes later and they’ve retained some of the information.”

Binghamton University is working in partnership with the University of Toronto to implement the Science and Technology curriculum developed and used in Ontario in schools within our region. The Windsor Central School District is the pilot district for this endeavor.

“With the collaboration with BU here so often the students know this is important stuff and important to them,” said Kindergarten teacher Tara MacNamee.

“It’s really to encourage kids to get involved in STEM. They think it’s hard but it can be quite fun,” said Kong.

Kindergarten and 2nd-Grade students at Palmer, Weeks, and Bell Elementary have all taken part in the program. Next up, 1st-Grade students at all three schools April 24-28. That’s good news for parents and students. Well, for the most part.

“Now I can make slime at home and teach my brother how to make it,” said Kindergarten student Elena Hohlbach. 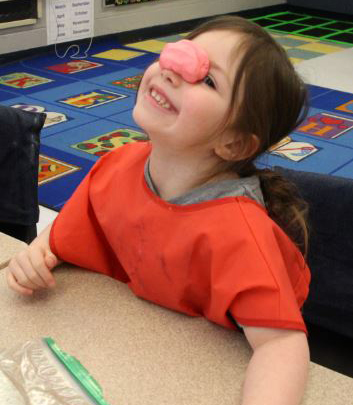 As well as presenting their projects the students also participated in a solar system simulation, experimented with liquid nitrogen, and saw an animal presentation from Jordan Patch of Animal Adventure. 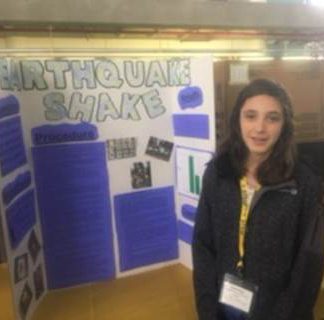 Ag in the Classroom at Weeks Elementary

Students in Ms. Matthews 2nd-grade class were buzzing as they learned where honey comes from. The lesson was part of the “Ag in the Classroom” program, a state-funded initiative to introduce students to the field of agriculture.

Students acting as bees dug through a tub of Cheetos which signified pollen. They tried to find the Starburst candy, or nectar, underneath. Students also got to wear beekeeper gear and sample honey.

“They get to see the materieals that we use and hopefully get them exposed to careers in agriculture,” said Sarah Atwood, Ag in the Classroom Educator from the Cornell Cooperative Extension.

“I think it was really cool and interesting. I didn’t know a lot of things and she taught me a lot of fun stuff,” said 2nd-grade student Danika Smith.

Kindergarten students have already had a calf visit their classroom while first-grade students learned an animal adaptation lesson as part of the program. 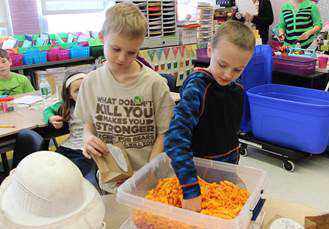